The cost of customs duties in G8 countries rose 4% last year from $99 billion to $103 billion, even ahead of the global ‘trade wars’, shows a new study by UHY, the international accounting and consultancy network.

The G8 countries’ import duties now amount to 1.24% of their approximately $8.3 trillion in annual imports.

UHY studied 20 countries around the world, calculating the value of their imports and the cost of duties on those goods and services (see chart below).

There is potential for the cost of tariffs to rise even further in the coming years due to the effects of global trade wars. In 2018, the United States introduced tariffs on a range of imported goods including steel, aluminium, washing machines, solar panels, and 818 categories of goods from China.

Several US trading partners have since responded by imposing retaliatory tariffs on imports from the United States. This has raised fears of a trend towards protectionism, which would increase costs for businesses and consumers worldwide.

UHY’s research shows that the biggest rise in the revenue from duties among major economies was seen in China, which registered a 26% increase from $37.8 billion in 2017 to $47.7 billion in 2018. China is one of the countries that levied retaliatory tariffs on US imports in mid-2018. However, the two countries agreed to postpone planned mutual increases in tariffs from 10% to 25% following talks in December.

US duties cost increased by 6.7% from $62.3 billion in 2017 to $66.5 billion in 2018. On several occasions, President Donald Trump has raised the prospect of the ‘Trump Tariffs’ policy being extended further. This could affect US car manufacturers who build vehicles in Mexico, as well as European carmakers.

“In an increasingly globalised economy, a trade war could affect both businesses and consumers.”

“If trade disputes cannot be resolved by negotiation and result in substantially increased tariffs, there could be an impact not only on the cost of goods, but also economic growth and employment.”

“The UK is in a very precarious position when it comes to trade deals and tariffs, as it prepares to leave the European Union, the world’s largest trading bloc.”

“Some politicians had suggested that the UK would have dozens of trade deals already in place by the time it leaves the EU, but that seems to have been challenging to deliver in reality.”

“A no-deal exit from the EU could prompt the Government to waive customs duties on some imported goods, to prevent businesses and consumers from being exposed to a steep rise in costs.”

UHY says that Israel is one country that is seeking to decrease the impact of customs duties, following a 14% increase in the cost of duties from $2.5 billion in 2017 to $2.9 billion in 2018.

“Israel is looking to buck the global trend towards increased barriers to trade that has emerged in recent years. The Israeli Finance Ministry plans to abolish customs duties entirely on a range of household items, at a cost of around $1 billion per year.”

“That is in addition to expanding trade deals, such as an exemption on customs duties for vegetable imports from Turkey.”

“There is a lot of uncertainty in the EU about potential future tariffs with the UK.” 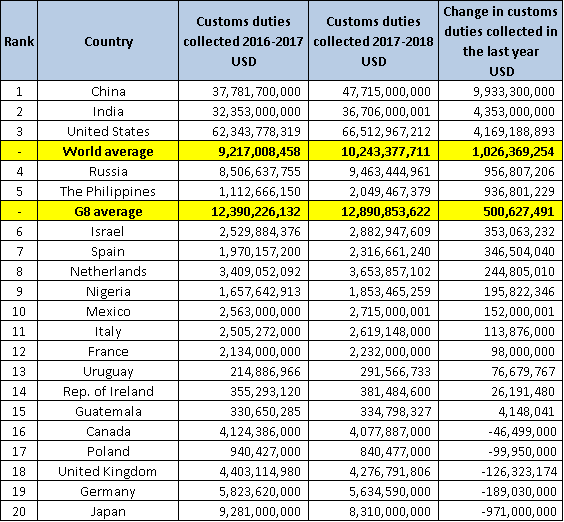